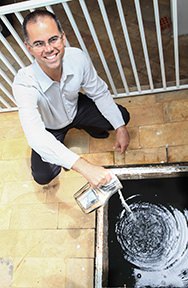 • Volkswagen uses internal communication channels to encourage conscious actions at
home, such as saving water and electric power
• Campaign is inspired by the “Think Blue. Factory.”, which aims to improve the
environmental indicators in 25% on every Volkswagen factory around the world
• Volkswagen aims to be the most sustainable auto industry in the world

Volkswagen of Brazil celebrates the launch of internal campaign “Think Blue. Factory.” in order to encourage its employees and their families to adopt increasingly sustainable attitudes also at home. The new campaign is inspired by the global concept “Think Blue”, by Volkswagen, which aims to be the most sustainable vehicle manufacturer of the world. The “Think Blue.” encourages the creation of solutions and environmentally friendly vehicles, making mobility more efficient, sustainable and accessible to all, thus encouraging society to act consciously. Part of the “Think Blue.”, the “Think Blue. Factory.” is applied to the productive process of vehicles and establishes a goal: until 2018, all factories of Volkswagen in the world must reduce 25% of the water and power consumption, generation of waste, emissions of CO2 and solvents, compared to 2010. With the new campaign “Think Blue. Factory. + House.”, Volkswagen of Brazil takes this incentive to sustainability also to the daily life of its collaborators.

To raise awareness, the new campaign “Think Blue. Factory. + House.” uses the company’s internal communication channels, disseminating guidelines and reports on the urgent need to conserve natural resources such as water; to consume less power, recycle waste, among other actions. The campaign also acknowledges and promotes sustainable initiatives of employees.

“Volkswagen of Brazil expects the participation of all its collaborators for ideas and actions for saving water, electrical power and other resources, plus recycling materials. Our wish is that these good practices also occur in outside the walls of the company”, says Celso Placeres, director of Manufacturing Engineering of Volkswagen of Brazil.

Among the solutions of employees already promoted by the campaign is the one proposed by the Quality Assurance Analyses Manager, Walace de Castro Lacerda Jr., from the Taubaté (SP) factory, who made a water intake system at home: From the roof, the rain is directed, by pipe, to a 10,000 liter tank; this water is pumped to a box that supplies discharges and taps in the backyard. “With this, we can water the plants and wash the house.” With R$500, Walace is building an even more sophisticated system in his new home: “The water of the bathroom tap and the shower will be pumped to a box in order to be re-used in flushing. The rain is going to the tank.”

The mechanic Junio Cesar de Mello, from the engine plant, in São Carlos (SP), has two barrels in the backyard, adding up to 400l; one, under the chute, receives rain water after being sieved, the barrel has a water outlet through pump, for washing. Another barrel collects water from the washing machine, by tubing.

The process analyst Marcos Alexandre Martins, who works at the Anchieta plant in São Bernardo do Campo (SP), has reduced his water bill in 40%: “In four barrels, which add up to 800l, I keep water from the washing machine and from the rain, the latter to activities such as washing clothes. I have installed flow reducers in the taps of the sinks. Another solution, which accumulates up to 20l/day, is collecting clean water wasted while the shower is warming up in a bucket.” This water can be used, first, for washing clothes; then, for house cleaning and the, for flushing.

Volkswagen of Brazil, aligned to the global concept “Think Blue. Factory.”, has been working hard in order to continuously improve its environmental indicators. Last year, about 96% of all waste of the productive process of the company were sent to some form of recycling. The company also reduced approximately 8% of the amount of waste sent to landfill or incineration in 2014, compared to 2010.

Volkswagen of Brazil also reduced by about 11% water consumption per vehicle produced, comparing the closure of 2014 with 2010. This is a result of investments in increasingly efficient processes, capture and reuse of water, plus creative actions developed in the factories, and many inspire employees to be sustainable also at home.

“Volkswagen of Brazil invests in extremely innovative processes and equipment, which are increasingly effective in continuously reducing the consumption of water and power in the production of vehicles. Beyond the environmental gain, advanced technologies allowed to take the quality to excellence, in addition to increasing our competitiveness in manufacturing. Volkswagen of Brazil always prioritized the reuse, and now intensifies the capture of rainwater, in addition to developing creative initiatives to conserve the resource”, affirms Celso Placeres.

A strong example of the company’s sustainability is the “Ecological Painting” performed in the Taubaté factory, which established innovative standards for technology and environmental protection. Innovations in the area have reduced by about 23% water consumption per vehicle produced and 30% of power consumption compared to a conventional painting. The area also uses water based inks, allowing minimal use of solvents and natural gas. For the implementation of the new painting, R$ 427,8 million were invested.

In all the factories of Volkswagen Brazil, 100% of vehicles produced go through leak test to ensure the quality of the gasket. The water used in the test, for years has been collected, filtered (in sand filters) and recirculated, seeking its maximum use. The improvement of this action brought additional savings to the already existing process of recirculation, of 698,000 liters in the three productive units of Volkswagen.

In the engine plant of São Carlos, innovative machining lines were implemented (process that transforms raw pieces into finished) with MQL (Minimum Quantity of Liquid), in which the need for oily emulsion (water and refrigerant oil) was drastically reduced. This system uses on average 0, 1l per hour of oily emulsion per machine, which reduces in 99% its consumption in the machining process, when compared to the usual system. In the same factory, the exchange of more than 200 conventional taps by automatic ones and other sanitary improvements save 2.9 million liters of water per year.

In the factory of São José dos Pinhais (PR), the water used to verify preventively the functioning of the network of fire pumps is reused to cool the equipment in productive areas and compressors. The action saves about 10 million liters per year.

In Anchieta factory, a partnership with Sabesp to the supply of industrial water allows the Volkswagen unit to send up to 840 thousand m3 of sewage per year to be recycled. After the treatment of industrial effluents, the sewage of the factory, including the domestic, is sent to a specific collector of Sabesp, connected to the Anchieta factory. These effluents are sent to the Effluent Treatment Station of the ABC, in the surroundings of São Caetano do Sul, where they receive treatment. Then, Sabesp returns part of the effluent to be used in industrial processes of other companies in the region.

The Anchieta unit captures rainwater, which if intense, can generate a quantity of resource equivalent to the average daily consumption of the plant. All the water that falls on the roof of one of the wings is captured, treated and used in industrial processes and in the flushing of lavatories. The process is so efficient, that the Anchieta factory develops projects to collect water in other roofs as well. Water quality is monitored to ensure excellence in the processes.

In São Carlos and São José dos Pinhais there is also rain water collection through chutes in the buildings. This water is filtered, passes through a storage box, then goes to the cooling tower. It is then used to reduce the temperature of machines in the production process. In São Carlos, after all this circuit, the same water still goes through a process of draining, to maintain the ideal concentration of minerals, and is again used for washing the racks that hold the engines produced by the factory. Only with the reuse of water in these two cases, the engine unit saves about of 1.54 million liters of water per year.

Piloted, electrified and fully connected – Audi at the 2016 CES