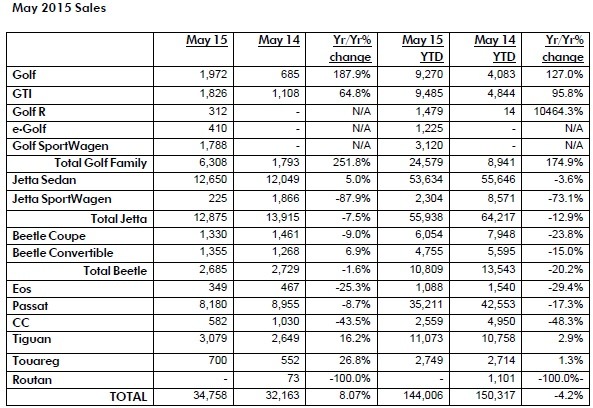 The all-new Golf family of vehicles continued to find success in the market. In May, Golf family sales totaled 6,308 units, marking the best May for the Golf family since 2000. The e-Golf delivered 410 units for the month, the best month ever for the vehicle.

“We are encouraged by the performance of the Golf family, delivering the best May in 15 years. We are happy to see the full-lineup delivering success, whether it’s the all-electric e-Golf, the TDI Clean Diesel models, the new SportWagen and the performance driven Golf R,” said Mark McNabb, chief operating officer, Volkswagen of America.

The Chattanooga-built Passat totaled 8,180 units delivered for the month. Volkswagen recently introduced the value laden Limited Edition model, which has a starting MSRP of $23,995.

Expansion of the Chattanooga plant is underway; a recent study estimates the expansion and addition of the upcoming midsize SUV could result in an impact of 9,800 jobs and $370 million to the Tennessee economy.

The Jetta, which was refreshed for the 2015 model year and has a suite of available driver assistance features, continued to show its strength as a core model, with 12,650 units delivered, a 5 percent increase over the previos May.

The Touareg, refreshed for 2015, delivered 700 units: 348 of these were TDI® Clean Diesel models, amounting to 50 percent of its sales. The Tiguan delivered 3,079 units, marking a 16.2 percent increase over the previous May.