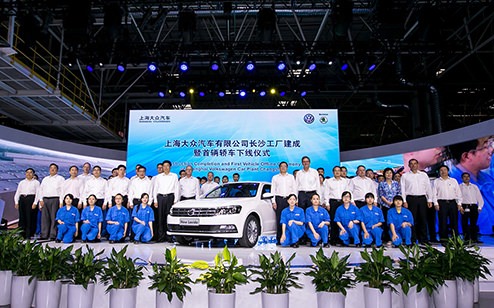 The Volkswagen Group continues to expand its production capacity in China. A further example is the new vehicle plant of Shanghai-Volkswagen (SVW) in Changsha, southern China, which is inaugurated today by Prof. Dr. Jochem Heizmann, Member of the Board of Management of Volkswagen Aktiengesellschaft and President and CEO of Volkswagen Group China. This plant is the Group’s 119th global facility and its 20th in China.

“China is not only the Volkswagen Group’s largest and most important market; it has also become the Group’s second home market. We intend to develop the entire country as a company with local roots, Prof. Dr. Jochem Heizmann emphasized. “The plant in Changsha is a key step in our “Go South” strategy in China. This new facility will bring us nearer to our Chinese customers and also improve the quality of our supply chain.”

The new plant in Changsha is about 900 kilometers to the west of Shanghai. Production of the Volkswagen New Lavida is beginning there after only two years of construction. Other models of the Volkswagen and ŠKODA brands are to follow. The total capacity of the plant is about 300,000 vehicles per year. The plant is creating more than 4,000 new jobs, together with 4,000 more in the neighboring supplier park.

The Changsha plant is the first production facility of the Shanghai-Volkswagen joint venture to receive the “Triple-Star Green Building Design Award”, the highest state award for environmentally compatible factory design. Thanks to a dry painting system (“E-scrub”), water and energy consumption will be reduced by more than 20 percent. Excess paint particles are filtered out in an environmentally compatible way by an electrostatic precipitator system. In addition, fresh water consumption in production has been reduced by 20 percent compared with conventional processes by using rainwater and recycled production water. Solar facilities at the plant generate more than 10,000 MWh of environmentally compatible power. Further power is generated by local hydroelectric plants. Production at the Changsha vehicle plant will therefore be carbon-neutral.

Volkswagen has been at home on the Chinese market for more than 20 years and is among the country’s western automobile pioneers. In 2014, Volkswagen, together with its two joint ventures FAW-Volkswagen and Shanghai-Volkswagen, delivered a total of about 3.7 million vehicles to customers in China, representing an increase of 12.4 percent over the previous year. With its partners, the Volkswagen Group will be investing more than €22 billion in China by 2019.