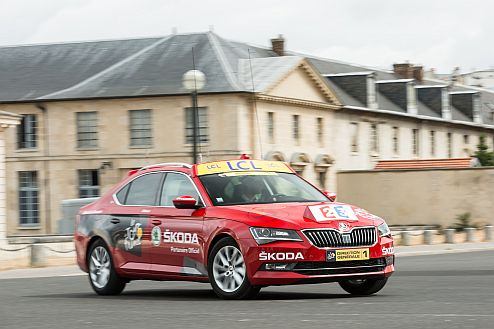 Just a few short weeks after being launched on the market, the new ŠKODA Superb is getting ready for its next big appearance. As the official ‘Red Car’ in this year’s Tour de France, ŠKODA’s new flagship will be rolling into the global spotlight. This is the twelfth time ŠKODA AUTO has been an official partner of the Tour de France, which will be taking place from 4 to 26 July.

​Four ŠKODA Superbs will be used as the ‘Red Car’ in this year’s Tour de France. ŠKODA presented the vehicles to the Tour organisers, the Amaury Sport Organisation (A.S.O.) yesterday. ŠKODA has been an official partner and official vehicle partner of the Tour de France since 2004. Under this agreement, the Czech carmaker will be handing over the keys to 250 vehicles, including ŠKODA Octavia estates and ŠKODA Superbs.

“Being used as the ‘Red Car’ will put the new Superb on a grand stage,” says Werner Eichhorn, ŠKODA Board Member for Sales and Marketing. “At this fantastic sporting event, we are looking forward to presenting our flagship not only to the millions of spectators along the route but also to several hundred million people watching on TV or online around the world.”

The new ŠKODA Superb was launched on the first markets in mid-June. With expressive designs, impressive technical features and the most interior space in its class, ŠKODA’s completely redesigned flagship is setting the standards in its segment, and has revolutionised the brand’s design language. Based on the Volkswagen Group’s innovative MQB technology, the third generation of ŠKODA’s top model has reached a new level, in terms of safety, comfort, connectivity as well as eco-friendliness, and has moved to the upper-end of the automotive mid-class.

As the official ‘Red Car’ leading the rider field, the new ŠKODA Superb will be visible to all fans. During the tour, the vehicle serves as a ‘mobile command centre’ for the Tour management. It is from here that Tour Director Christian Prudhomme gives the green light to start each morning, organises the traffic movement around the Pelothon, and keeps in constant contact with the marshals. In addition, the ‘Red Car’ is the only vehicle that can cross the finish line of each stage with the riders.

With the most interior space in its segment, the new ŠKODA Superb makes the perfect ‘Red Car’. Christian Prudhomme can look forward to space and comfort fit for a Royal. In terms of legroom, there is no other vehicle in the automotive mid-class that could compete with the new Superb: 157 mm – that is around twice as much room as the nearest competitor. The third generation even has more headroom and elbowroom than the second.

Christian Prudhomme praises the car’s exceptional amount of room: “I love my ŠKODA Superb. It’s a fantastic car. Gilles Maignan, my driver, is 6’2″ like me, and I can sit in the back very comfortably – even crossing my legs isn’t a problem. This year, I’ll have the privilege of travelling in this new generation and being able to try out these new comfort features.”

The new Superb has been painted in ‘Corrida-Red’ for its appearance in the Tour. The drivetrain consists of a 2.0 TDI/140 kW (190 hp) (1) diesel engine combined with a DSG six-speed gearbox.

The interior of the ‘Red Car’ features an impressive range of technical equipment, including four radio channels, to transmit and receive orders and information. The technology can be controlled from the back of the car where a large centre console has been installed. In addition, the red Superb boasts a panoramic glass roof that can be opened from the back seat at the touch of a button.

The brand will be an ever-present symbol at this year’s Tour with the strong ŠKODA fleet. ŠKODA will be handing over the keys to around 250 cars, mainly ŠKODA Octavia estates and ŠKODA Superbs to serve as shuttle vehicles. Providing this valuable service has been ŠKODA’s commitment for a number of years. During their three-week assignment, the vehicles will cover around 2.8 million kilometres. Since 2004, the ŠKODA fleet has clocked up around 30 million kilometres. This is where ŠKODA shines with the highest reliability: not once have any of these vehicles broken down.

ŠKODA will be sponsoring the Green Jersey – worn by the best sprinter – for the first time at this year’s Tour. Activities in electronic media will complement the brand’s sponsorship of the Tour de France.

Cycling is a cornerstone of ŠKODA’s sponsorship strategy. Besides the Tour de France and the Tour of Spain (‘Vuelta’), the car manufacturer supports other international cycling races and numerous international and national grassroots cycling events. Furthermore, ŠKODA offers many bicycles and cycling accessories in their product range.

Sponsoring cycling events shows the special relationship the brand has with the bicycle. It was with the construction of bicycles that ŠKODA’s founding fathers Václav Laurin and Václav Klement began the company’s success story 120 years ago. 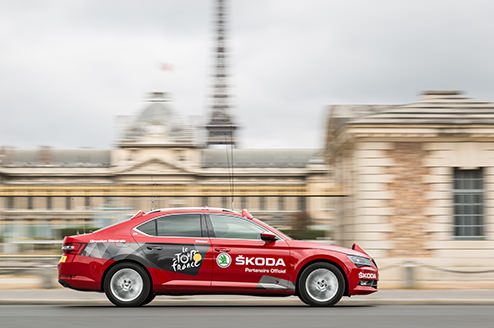