• Deliveries worldwide reach around 153,850 in the month – up 1.2 percent
• Sales chief Luca de Meo: “Launch of the Q7 in Europe will provide positive
momentum”
• Audi TT sales doubled in May

At around 153,850 cars, Audi’s worldwide deliveries in May were slightly above the figures from the same month last year (+1.2%). In addition to the upcoming model changes for the Audi Q7 and the A4, the brand’s top-selling model, the current reticence to buy in the Chinese luxury segment was particularly noticeable. The picture in the Americas is, however, very different: here sales of the four rings continued to increase sharply, up 11.1 percent to around 24,500 vehicles. The Audi TT, whose global sales doubled in the month (+96.6%), also helped drive the company’s sales. Across all models, Audi has delivered around 744,900 cars to customers since January, an increase of 4.3 percent.

“In the upcoming months we expect to see an additional boost from the new Audi Q7. It will come to European dealerships in June,” says Luca de Meo, Member of the Board of Management for Sales and Marketing at AUDI AG: “We are currently seeing a great many contrasting developments in the markets; the SUV boom is, however, a uniform global trend. Sporty off-roaders are growing more strongly than the market in all regions.”

In the United States, the world’s largest SUV market, the Audi Q3, Q5 and Q7 achieved combined growth of just under 37 percent in May. Across all models, the U.S. sales figures of the Ingolstadt company grew by 11.0 percent to 18,428 units. As such, Audi achieved its second-best monthly result in company history in the United States. Audi deliveries have climbed by 11.7 percent in the market since January. Audi also saw considerable growth in Canada, with sales up 26.2 percent to 2,880 vehicles. In the first five months of the year, the company delivered just under 10,800 cars to customers in Canada (+18.6%), almost as many units as in the whole of 2009.

In Western Europe, Audi managed to exceed its result from May 2014 (+1.4% to 64,900 units). Italy (+23.3% to 5,336 cars), Spain (+13.4% to 4,037 cars) and Portugal (+38.2% to 1,002 cars) achieved growth rates here well into double digits. In Germany, the four rings increased its deliveries slightly by 0.8 percent to 24,727 units. The new Audi TT proved one of the top sellers, with sales doubling in May (+157.8%). The Audi A6 was also very popular among customers in Germany in the past month. Sales of the Avant version of the A6 increased by just under 17 percent. Across all model variants, Audi has delivered just under 123,600 cars in Germany since January, an increase of 6.1 percent. In contrast to Western Europe, there are very few signs of a reversal of the trend in Eastern Europe, where the downturn in the economy continues to be felt. In Russia, for instance, the demand for Audi models fell by 37.1 percent in May.

In China, Audi also felt the impact of the current reticence to buy in the luxury segment: The brand’s deliveries came in slightly below the 2014 figure with 47,410 units (-1.6%) in May. Since January the company has sold 226,022 cars in China – an increase of 3.7 percent. By contrast, Japan is showing the first positive signs of a market recovery. Here, Audi sales climbed 16 percent to 2,502 vehicles in May, the strongest growth for 14 months. 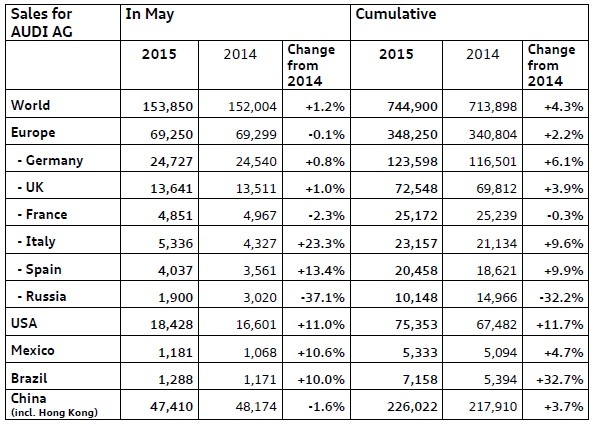